how the machinery works

Essentially there are only a few basic types of tattoo machine.  The image below shows the classic magnetic coil machine, which uses an alternating electric current to turn magnets on and off in rapid succession to pull a spring-loaded armature bar in an up and down motion.  The second is a rotary motor which uses electrical current to drive a spinning motor which is attached to a piston armature that translates the spinning motion into an up and down motion.  The third more modern, and quite rare (due to its high cost, loud shriek, and utter inconvenience) is a pneumatic tattoo machine that uses compressed air to drive a piston in an up and down motion. 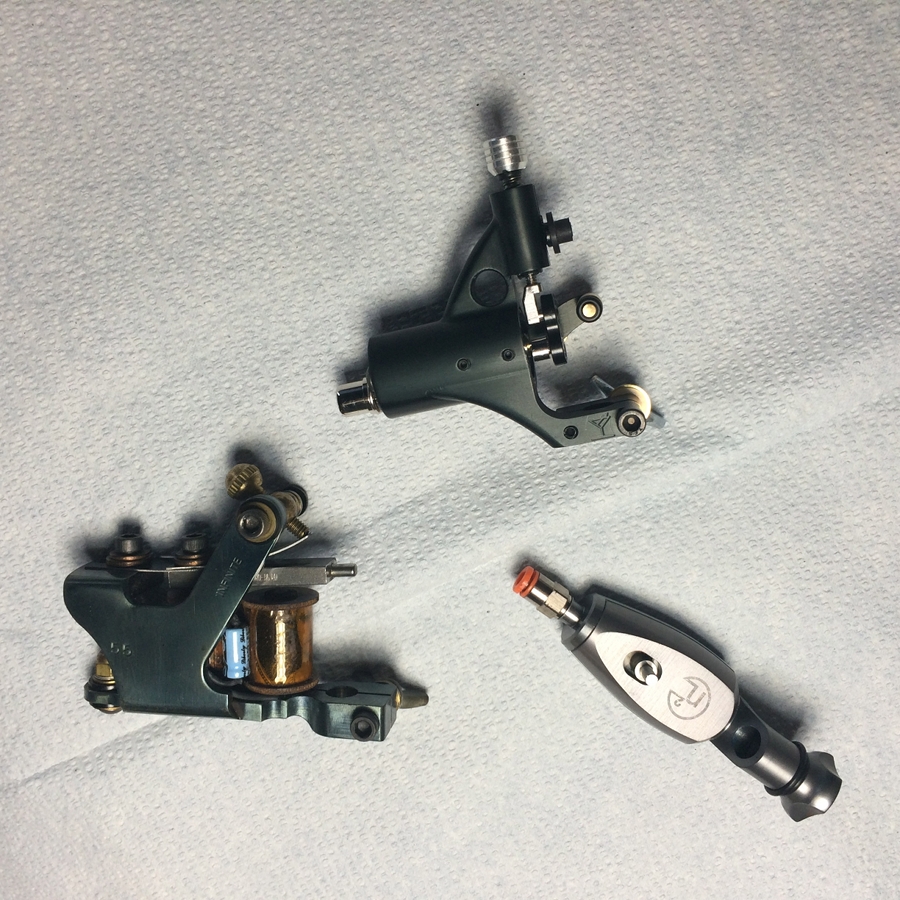 The electric coil machine is sort of the “harley Davidson” of the tattoo world. Its loud, rattles itself apart with prolonged use, but has a cultural identification that will never go out of style.  Many artists are loyal to this antique, beautiful, elegant, and classic tattoo machine despite its loud buzzing sound, and tendency to need constant maintenance.

The rotary machine is more like the “BMW” of the tattoo world  They started out in prisons and at home being made from cassette player motors, and were not very adjustable or responsive to the skin, consequently they were discredited by industry professionals.  However  in recent years they have made a major come-back  as different devices are being developed which allow it to produce an action more similar to the coil machines.  They also run almost silent, and are much more maintenance free than coil machines.

Pneumatic machines were developed recently, they require very expensive “quiet” running compressors, and the running of air lines and filters throughout the shop.  They produce beautiful tattoos, as well as a dental drill-like shriek, and a jet of ice cold air exhaust that blows on the client.  I tried them, and decided to encase them in acrylic and make belt buckles out of them.

The tattoo needles are set at the end of what is called an armature bar, which connects to the part of the machine that travels up and down.  The armature bar passes through the “TUBE” that has a hand grip attached, which is fitted into a vise on the machine to hold it in place.  Some tattooers use tubes that are made of stainless steel, which must be cleaned and sterilized after each use. The steel tubes are preferable for several reasons, however many tattooers are switching over to disposable plastic tubes like those shown here for reasons of safety and convenience. 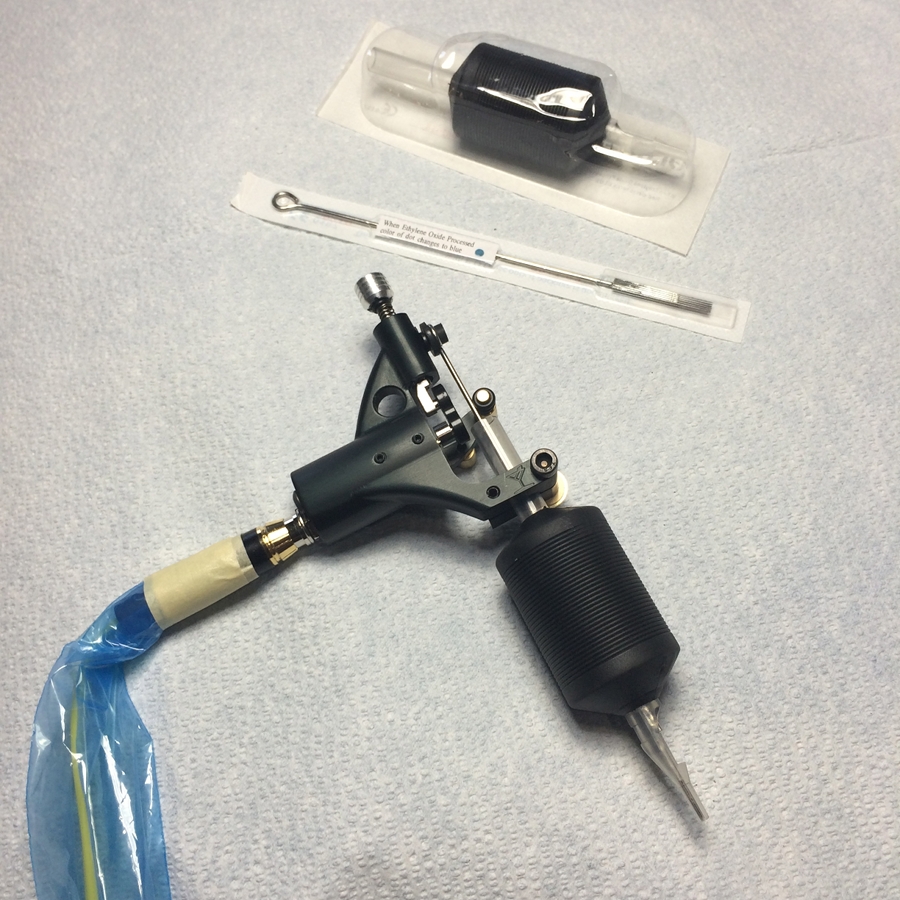 The tube is set so that the needles only extend beyond the tip of the tube an appropriate distance, the photo below shows about how far into the skin tattoo needles penetrate.  The up and down motion of the needles in the tube create conditions which draw tattoo pigment up into the tube, and allow it to be released when the needles are running in the skin. 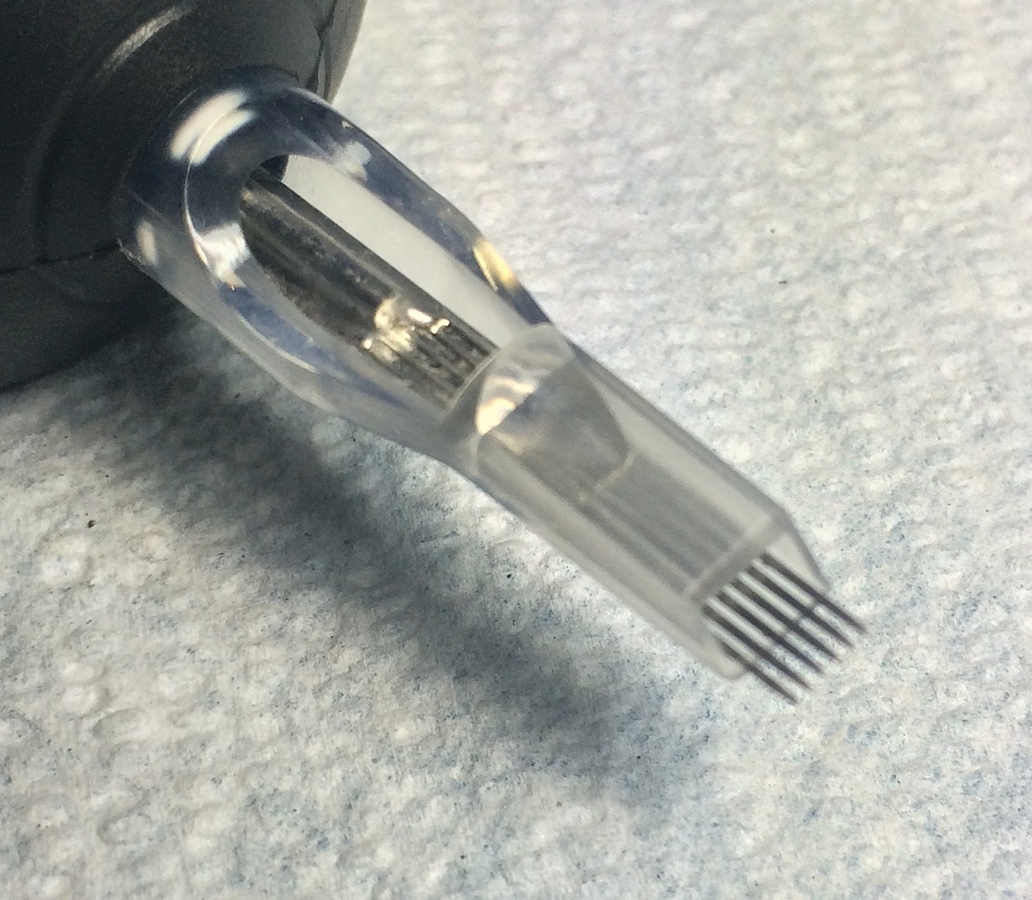 The assembled machine is connected to a power supply (shown below) by a special wiring harness called a “clip cord” or “RCA cord”.  The power supply has settings which can control the speed of the machines, etc, and is most commonly activated by a foot switch, to keep the tattooers hands free. 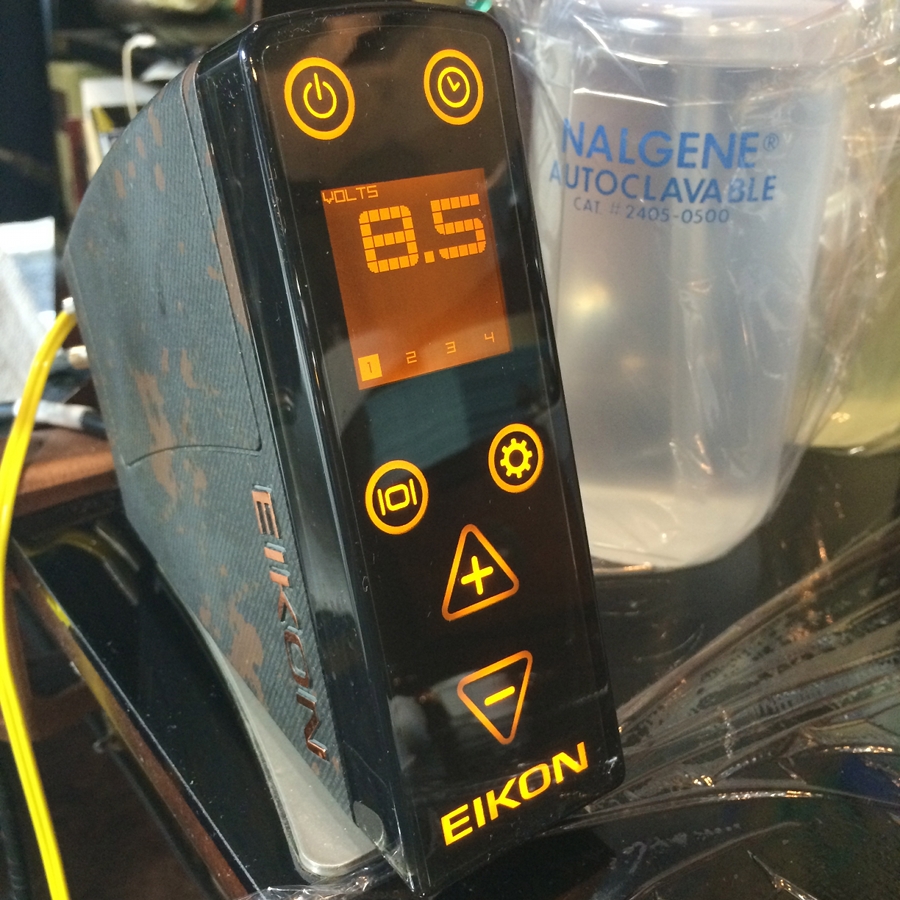 When the tattooer is working, they will stretch your skin, press the foot pedal, the machine will run the needles up and down as the tattooer passes the tip of the tube over your skin, the needles carry pigment along as they travel and deposit into your skin where it will (hopefully) stay forever. 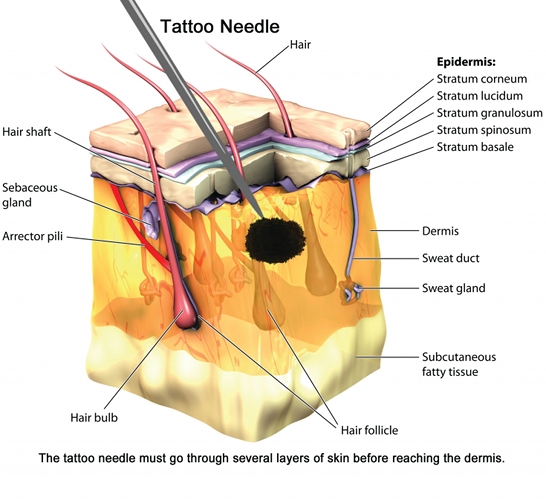